50 Plus Club Member 1,868 posts deepestblue 50 Plus Club Member 1,868 posts
bernintheusa Administrator  ❤️❤️❤️❤️ 1,976 posts
bernintheusa Administrator  ❤️❤️❤️❤️ 1560563434
Quote:
Bernie did until he allowed his voters to be cheated at the polls and then allowed the white collar criminals who did it blame the Russians with global political consequences.

Bernie did lead ? did have our trust ? did take our money ? did repeatedly shoot himself in the foot ?

Quote 3 3 0
TheNutcracker 50 Plus Club Member 359 posts
TheNutcracker 50 Plus Club Member 1560603251
beebee wrote:
Every once in awhile I save a comment in ‘My Notes’ I found worthwhile and that encapsulates something for me.Credit due, as always,  to the poster,  K9disc at C99.
beebee wrote:
How else could someone like creepy Joe been able to lead in the so called polls?Yeah they are probably fake again, but hey Bernie, what’s new?Or about the criminal enterprise you continue to support?Their and your finger pointing at Russia?You not directly standing up for Assange?If you are not part of the solution on these, Bernie, as much as we might might really like your domestic proposals, on the larger scale, you are part of the bigger problem.
_________
Well said. In the end I remember he said he had to decide about his career and chose his career. He missed the biggest opportunity for an upset for the people.
Quote 1 1 0
deepestblue 50 Plus Club Member 1,868 posts
deepestblue 50 Plus Club Member 1560673483
Proof Sanders is sheepdogging again is his incessant and often baseless attacks on Trump (Russiagate, impeachment, calling him a "pathological liar" while endorsing her in 2016 etc).  Had he been running with an independent and free mind, he would not so viciously scold the man that millions of his own voters voted for.  On the contrary, he'd be trying to bring Trump voters back into his column.
Quote 2 2 0
deepestblue 50 Plus Club Member 1,868 posts
deepestblue 50 Plus Club Member 1560674556 · Edited
Quote:

Sheepdog me once, shame on you; sheepdog me twice . . .

Re: Bernie Sanders goes all in on democratic socialism - again

I tried bolding what I felt were the top points in the quote above but ended up bolding the whole damn thing Lol.

The only thing I am concerned about is the fake news mind control you speak of having the effect of putting the dems over the top as happened in 2018 in the house, but am inclined to think what you said will be the outcome.

The outlier is if Trump starts a new war somewhere but then again the masses are conditioned to want, love and beg for war, so that probably would help him too.

In the end, excepting someone exceptional like Tulsi, Trump is better for world peace and so forth than any dem or pure neolibcon.  Don't believe me, look at the wars started scorecard over the last 20 years.  Obama 5 Bush Jr 2 Trump 0.

Quote 0 0 0
beebee Administrator  ❤️❤️❤️❤️ 5,250 posts
beebee Administrator  ❤️❤️❤️❤️ 1560742726
No longer sure who Bernie actually is since it seems he went a-wall.I can think of no better word for it.So let’s just say, we support him on his domestic policy, but then what?That’s a question that really does need to be answered.What else might he get us into, foreign policy wise, or better yet most likely just agree to go along with it?To me at least, he cowered, at the exact moment he had the opportunity to rise and shine.Now he trails a smile bright, hair plug idiot.

I am sure I’m not the only one who looks at it this and wished he had grabbed the brass ring, when he the opportunity and we had the chance.

But he let that all pass us all by.


As much as I did believe in him, I’d feel hard pressed to do so again.
I’m not really sure now, he really did want it, as he crumpled like a cheep tent so easily, after even saying it was for us not him!

So why then, if so, did he get to decide to bail and send us all adrift??

When we really needed him to be there for us, as we were all for him in support, suddenly he wasn’t.
He was sweating and singing the praise of our nemesis because of his duplicity and gradually bit by bit he became more comfortable with it and Russia did it.

And now he’s making agreements, concessions w his and our then captors again, when we all know he really doesn’t need to.

After Clinton lost, and he was the most favorable candidate, (they screwed ) so he should be calling the shots, but no, he is not, he’s following orders again and  he’s agreeing to their terms.
We will not win fighting what we hate but by saving what we love.

Keep Calm and Carry On 👍

If they give him 2 or 3 insulting questions, then push him aside and he doesn't fight back, it's Deja Vu all over again

Why does he even need these debates, he has name recognition and a million volunteers while the people watching cable TV are the sheep he will never convince 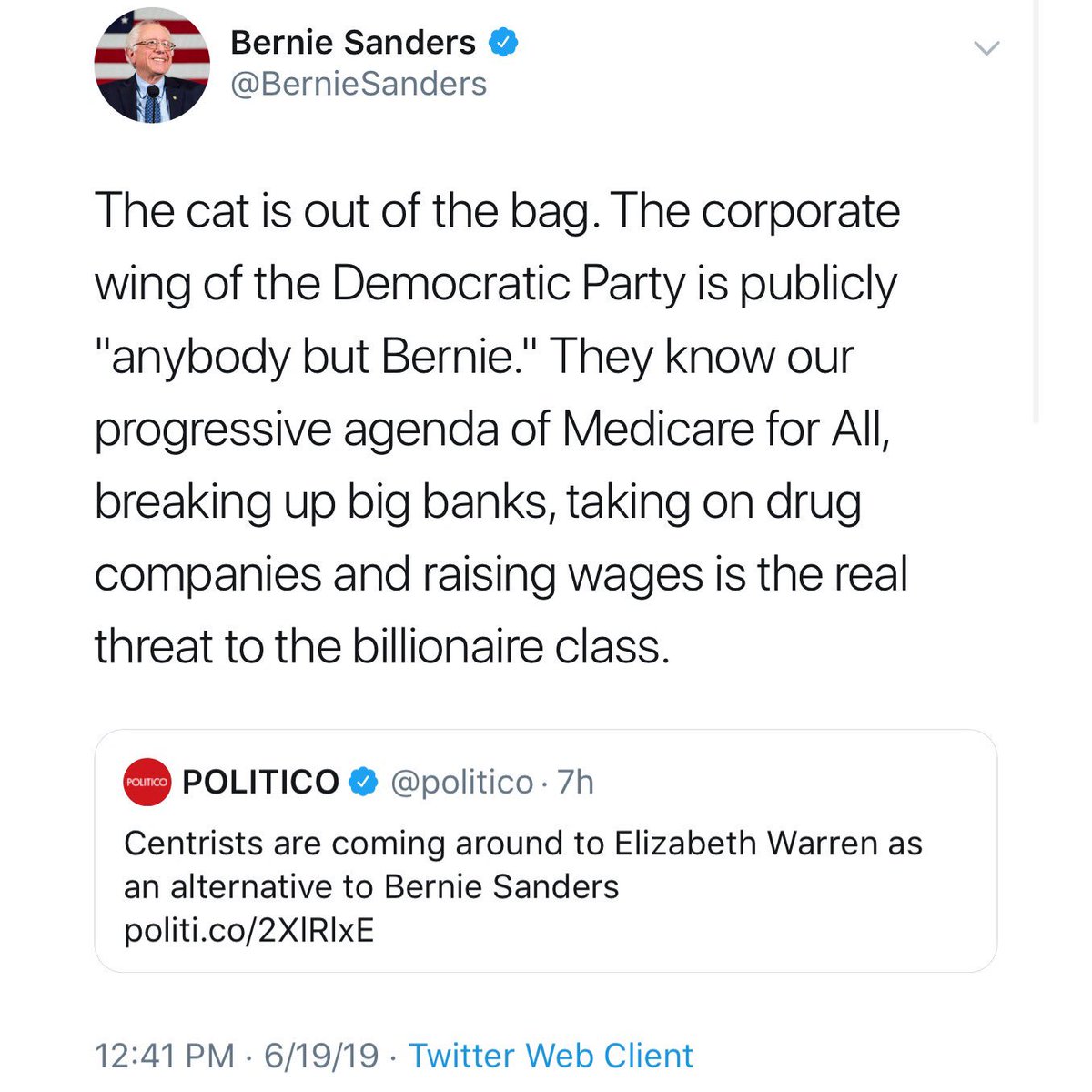 ..and the comments from the loud yet ineffective neoliberal minority below his tweet:

What's really funny is when Sanders tweets a criticism of Trump it jams their wires, and it appears that they often unsurprisingly support Trump's corporatist or militarist position over Sanders' populist position.

What's even funnier is that in state after state, when Sanders was cheated last time he stood down.
Quote 0 0 0

If your URL is correct, you'll see an image preview here Large images may take a few minutes to appear. Remember: Using others' images on the web without their permission may be bad manners, or worse, copyright infringement.
Cancel
filename
0%
Cancel
(Failed)filename
Unsupported photo file type. Please upload the file as a post attachment instead.
filename strippederror

You need to be logged in to send an email.

Please paste your code into the box below: